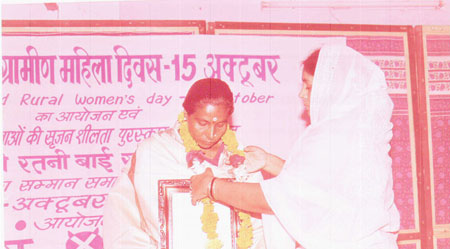 Who says that an illiterate, rural and backward caste woman can not achieve pinnacle of success? In the ‘Women Empowerment Year’, Ms. Ratni Bai has proved this to be wrong.

Ratni Bai Khatik (28) has been honoured with the Prize for Women’s Creativity in Rural Life by the Women’s World Summit Foundation, Switzerland. She has been recognised for her exceptional creativity, courage and perseverance in improving the quality of life in rural communities. This prize, selected by an international jury, highlights her grassroots contribution to sustainable development, household food security and peace. The award includes a badge, a certificate and token prize money of US$ 500. She is one amongst 10 in Asia and one amongst 31 in the world to be conferred the award.

On 15th of October 2001, in the event of World Rural Women’s Day organised by the CUTS Centre for Human Development (CHD), Chittorgarh the prize was presented to her by Ms. Anand Sandhu, a noted social activist and Chairperson of Chittorgarh Municipality amidst distinguished guests and a humble voluntary gathering of 150 people, mostly rural women. Empowering rural women has been the prime focus of the Centre and celebrating the creativity of courageous women the key strategy for wider outreach as well as greater involvement. Ms. Ratni Bai contributes her achievement to the concerted effort of the woman members of the self-help groups (SHGs) and the local community leaders (institutional & informal). While receiving the award she mentioned that commitment and belief in traditional knowledge system leads to community development. She further said that she would rededicate herself for improvement of the status of women in the society and her priority would be encouragement of the education of the girl child.

Speaking on the occasion Ms. Sandhu described her as the pride of Mewar (the southeast region of Rajasthan state) and emphasised that the prize signifies her strong willpower, commitment and dedication. Mr. S. K. Verma, District Manager, NABARD (National Bank for Agriculture and Rural Development) compared her with an illuminating star, which motivates others and encourages replication of efforts. Coverage of the event was done by All India Radio, Chittorgarh and the print media. Earlier, the Rajasthan Patrika, Chittorgarh had conducted an exclusive interview of the laureate, which was published by the newspaper on the World Rural Women’s Day.