On December 4, 2014 World Disability Day was observed with the collaboration of Department of Social Justice and Empowerment, GoR, CUTS Centre for Human Developemnt and Mewar Viklang Seva Sansthan(DPO) 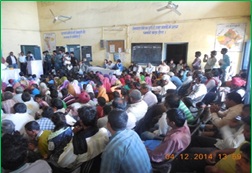 World Disability Day program was celebrated with an objective to raise awareness and educate, various schemes, fighting for the rights of individuals with disabilities called for better programmes and policies to ensure equal opportunities for the disabled. 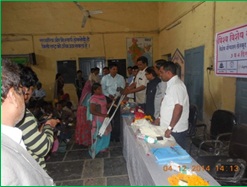 On this day, a camp was organised where about 400 PwD and their family members were participated, the RSIP team under the able leadership of Kamlesh Jangid, Project Coordinator RSIP, motivated to PwDs in their proposed area and asked to come for getting the aids & appliances and interact with each other who come from various project locality.

Through the good invitation to PwDs, 246 application were received, who are interested in getting new supportive services, on this day 91 PwDs got the tricycles, crutches, calipers, hearing aids, white canes and all eligible PwDs got the medical certificates, rail pass/bus pass and filled the pension and employment schemes forms. 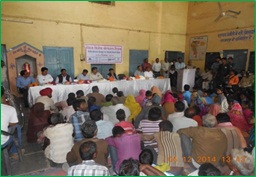 DPOs members has given the warm welcome to all guests and offered the garlands to each special guests, In an introductory remarks and welcomed speech by Mr. O. P. Toshniwal to chief guest/special guests/PwDs/other dignitaries, He shared about the govt. schemes benefits information to PwDs in Chittorgarh and said that Chittorgarh is first district, who got the best award at state level in Jaipur by the grace hand of Minster of Social Justice & Empowerment, in providing the best result oriented support services to PwDs from district, some credit goes to CUTS CHD and CBOs disseminated the government scheme to PwDs at local level, contributed many efforts for getting all benefits for PwDs, he said his department is always ready to be continued this kind of camps at block level also. 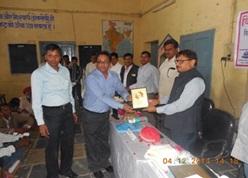 Mr Sushil Sharma (Chairman Municipality) addressed in event, he is given thanks to community to elect him a new chairman of municipality, he is also given assurance to help all Pwds through his new departments and he is given special thanks to Mr O.P Toshniwal (Dy Director, DSJ&E-Chittorgarh) and CUTS for a great valuable support to organise this successful camp event.
District magistrate, Honb’le Shri Ved Prakash said in his speech, most of the people even do not known that how many people are disabled in the society around their houses. They are getting their equal rights like normal people in the society or not. They need some assistance by the normal people to rise in the life, to get dignity and life of well-being. But, generally the people in the society never know all the needs of them. According to the record, it is found that approximately 15% of the total population of the world is disabled people.

So, it is very necessary to celebrate this event to get people aware about the real condition of the people with disabilities. People with the disabilities come under “the world’s largest minority” and faces a lot of obstructions in all the aspects of life because of the lack of proper resources and rights for them, but the efforts of CUTS and SJ& E department will come over the gap of needs and services to PwDs 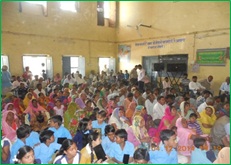 On this day, District Collector and other dignitaries awarded the mementoes to PwDs and special award given to CUTS CHD for their valuable contribution for working with person with disabilities to enable PwDs to advocate for their rights and opportunities.
Mr Gauhar Mahmood CUTS CHD said the vital purpose of this day celebration is to improve the understandings of the people worldwide towards the people with disability issues as well as get together to support them to improve their self-esteem, well-being and rights in the society and will able them for get their rights in equality in community. 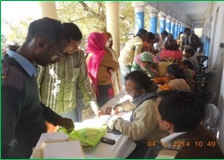 Mr Mohan Lal Jat, DPO member said, the Disable people take anything as a challenge. For the disabled people, their disability is not an inability, but through self-confidence and efforts, the Disable people prove that they can do anything as equal as general; He said this occasion gives an opportunity to the community to express its solidarity with the disabled people.

Mr Madan Giri Goswami is given thanks to all guests, dignitaries, PwDs to participate in event, the event ended with followed by lunch and refreshments. 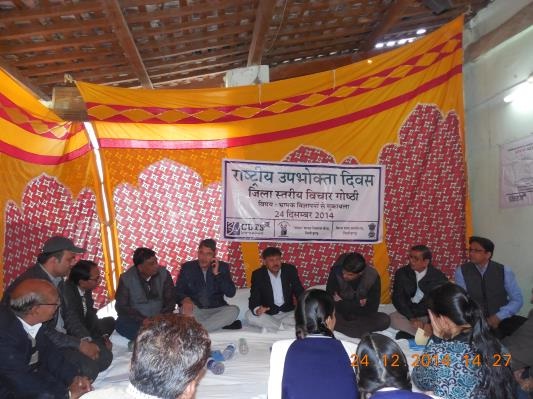 On Dec 24, 2014, CUTS Centre for Human Development and District Supply Office, Chittorgarh jointly organised a “Seminar on theme of combating misleading advertisement” on National Consumer Rights Day at the place of CUTS CHD, Speaking on the occasion, District Collector Ved Prakash said the consumers, while checking the quality of the products they were buying, should also take a note of the date of manufacture and expiry, the batch number, the actual weight etc. and should get the receipt for every purchase as it alone would help the consumer get his grievance redressed, if any, after the purchase.

“If the seller refuses to give receipt for the sale or the product is of substandard, the buyer should inform the District Consumer Office and a file a formal complaint through e-mail for speedy action,” the Collector suggested.

Mr. Virender Singh Shekhawat, DSO spoke about the background of the National Consumer Rights Day and on the theme of ‘Combating misleading advertisement!’ He raised that collective action by the government and consumer organisations is the key step towards ensuring consumer justice. 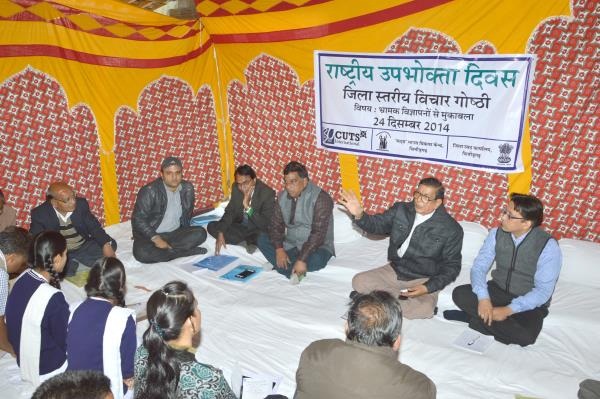 Mr. Laxmi Kant Balot, CEO, District Council a demanded to strengthen consumer organisation like CUTS, who have proved its strength and efficiency. 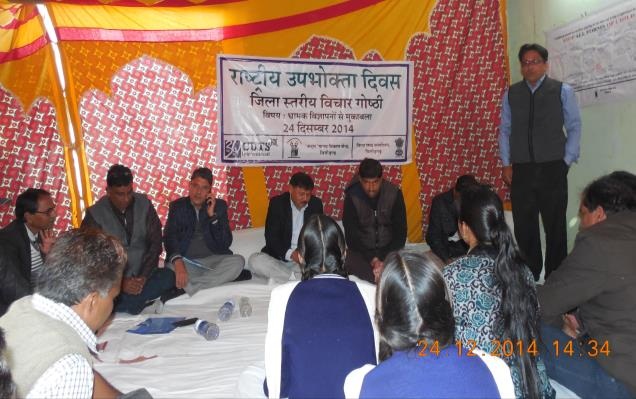 Mr C.M Garg,Legal Advisor, said the day provides an opportunity to highlight the importance of the consumer movement and the need to make every consumer more aware of their rights and responsibilities.

Some local based NGOs, CSOs, media, academics, government officials, general consumers from village and town and several other dignitaries were participated on the occasion. The seminar was attended more than 55 consumers and raised their concerns and suggestions.

Mr. Gauhar Mahmood, Centre Coordinator CUTS Centre for Human Development, summed up the discussion while thanking all the participants and ensured the participants for taking up the issues in interest of consumers. 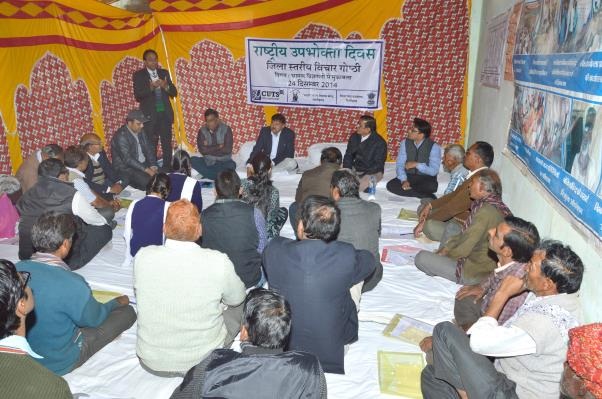 Children’s Day is to celebrate ‘childhood’. India’s first Prime Minister, Pandit Jawaharlal Nehru, was born on November 14, 1889. After his death in 1963, his birthday has been celebrated as children’s Day in India. Children’s Day is not just a day to let the future generation