Workshop on Depositor Education and Awareness (DEA) fund Scheme of Reserve Bank of India Plan Activity for Pilot Programme by CUTS held in Chittorgarh on Aug 31, 2016 at Hotel Padmini, Near Sainik School, Chittorgarh. 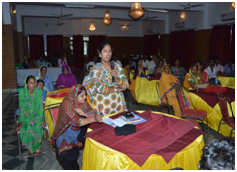 Background The Reserve Bank of India (RBI) has established the ‘Depositor Education and Awareness Fund (DEAF) Scheme 2014’, considering unclaimed funds of depositors in order to utilise them for promotion of interests of the depositors’. The statutory basis of this fund is Section 26 A of the Banking Regulation Act, 1949 and on such grounds, this fund was created by taking over inoperative deposit accounts, which have not been claimed or operated for ten years or more or any deposit or any amount remaining unclaimed for more than ten years lying in various banks in India. It is to be noted that as per the information provided in Indian Parliament in December 2013, crore of unclaimed deposits are lying in Indian banks comprising banks in major cities of the Rajasthan like Jaipur, Kota, Udaipur, Ajmer, Chittorgarh, Bhilwara and Jodhpur etc. However, this does not deny the rights of the depositors/claimants to claim their deposits/unclaimed amount. Banks on demand, should repay the customer/depositor, along with interest if applicable and lodge a claim for refund from the fund for an equivalent amount paid. The RBI has constituted a Committee to administer and manage the fund in accordance with the Scheme. The fund needs to be utilised for promotion of depositors’ interests and for such other purposes, which might be necessary for the promotion of depositors’ interest as might be specified by the Reserve Bank of India.

The RBI had invited application from the non-government organisations (NGOs) to conduct awareness related programmes from the fund and for this purpose, they registered themselves with such institutes. CUTS as per the mandate given by the RBI, decided to conduct awareness workshops in five cities of the State of Rajasthan comprising Jaipur, Kota, Chittorgarh, Bhilwara and SawaiMadhopur in the initial state of Phase I. The programme witnessed the participation of consumers from rural as well urban, representatives from the RBI along with different banks and media. Various bank officials served as resource persons, and provided valuable information and important guidelines about safe and secured banking.

GauharMahmood, Centre Coordinator CUTS Centre for Human Development welcomed all the participants and also briefed the audience about the purpose of organising the event..

George Cheriyan, Director, CUTS International in his opening address briefed the participants about the organisation and as to why the theme has been selected as part of its financial literacy drive. He also provided a brief orientation on the theme, advantages of having a bank account and objectives of the DEAF workshop. Further, George Cheriyan revealed that as per the information provided in the Indian Parliament in December 2014, about 3,652 crore of unclaimed deposits are lying with various Indian banks. Out of this, nearly ₹3237 crore were found to be with public sector banks, ₹340 crore with the private banks and ₹75 crore with the foreign banks. Out these unclaimed deposits of about 68 percent are from savings accounts and 13 percent belongs to fixed account category. Moreover, around ₹1.09 crore saving accounts are retaining unclaimed amount of ₹2473.97 crore. Hence, he said, “this is the money of common consumers and there is a need to utilise the same for empowering the consumers of financial services”. 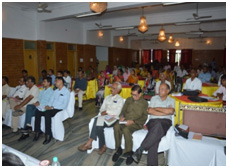 Inderjeet Singh, District Collector Chittorgarh spoke on digital literacy is required to spread the awareness about the banking services like grievance cell and cashless society, so that people can come and know about that services and formalities of opening bank account. Talking about the cashless society, Singh explained that the reason behind to bring the cashless society is that every transaction should move forward to digital/digitise as India is currently running on second number in terms of digitisation. Like, if we take a look into the use of Paytm, BHIM, Mobikwik and other digital apps, it is the best and authentic way to pay any expenses for using these apps services.

In Techincal session, Deepak Saxena, Assistant Director, CUTS CART said the objective of the workshop is imparting education and awareness for the promotion of depositor’s interest and to provide safe and secured deposit lessons to various depositors. he encouraged particpants to have on bank account, discourage public from keeping money in illegal non-bank entities, demystify KYC requirements, and provide information about customer rights as a depositor,

Munish P Kothari, Chief Counsellor Disha Trust FLCC Jaipur speaking on Safe Banking briefed about the initiatives taken by the RBI for protecting consumer rights like, Banking Ombudsman Scheme, Financial Literacy Campaign at all India level and Charter of Customer Rights focussing on Fair Treatment, Transparency, Fair and Honest Dealing, Suitability, Privacy, Grievances redress and Compensation, Banking Codes and Standard Board of India, which was set up in 2006. With regard to recent achievements in protecting consumer rights of financial services, he laid stress on abolition of foreclosure/prepayment penalty on floating rate loans, levying of SMS charges on actual usage basis, abolition of penal charges on nonmaintenance of minimum balance in inoperative accounts, uniformity in intersol charges, rationale of bank charges on NEFT/RTGS, ethical behaviour and Customer Compensation Policy.

SD Vaishnav, Branch Manager, Baroda Rajasthan KshtriyaGrameen Bankexplained the difference between Recurring Deposit (RD) and Fixed Deposit (FD) and also spoke about the interest rate on saving and current account. RD is a special kind of Term Deposit offered by banks in India, Vaishnavalso explained about the benefits of using I-mobile banking which can be used anywhere.

RP Sharma, Lead District Manager Chittorgarhelucidated about nomination benefits in the user’s current bank account and the requirement of updating the nominee too. Sharma explained that any person having a bank account should specify the nominee’s name, so that in case of any mishap or accident, the amount can be claimed by the nominee at that time. The updating of name of the nominee is also one of the very important aspects, like in case of nominee’s death when the name of any new nominee is not specified, the customers family members cannot withdraw the deposited amount. All resident individuals having single account and deposit should ensure that they update names of their nominees from time to time. Concluding the session,

SN Somani, Assistant General Manager, State Bank of India explained about the ECS Return Charges, Rupay Pay Card and their benefits of having that. Somani also spoke about the Atal Pension Yojna, which is applicable for people in the age group of 18 to 40 years and the duration of this pension yojna is 60 years.