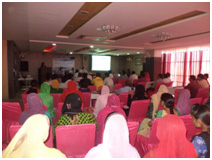 Workshop on Depositor Education and Awareness (DEA) fund Scheme of Reserve Bank of India Plan Activity for Pilot Programme by CUTS held in Bhilwara on July 22, 2016 at Hotel Shagun, Bhilwara. GauharMahmood, Centre Coordinator welcomed the guests and said in addition the programme will impart education and awareness for the promotion of depositor’s interest and to provide safe and secured deposit lessons to various depositors in five selected districts of Rajasthan. George Cheriyan Director CUTS International in his opening remarks saidthat Reserve Bank of India (RBI), has established the ‘Depositor Education and Awareness Fund (DEAF) Scheme 2014’, comprising of unclaimed funds of depositors, for the purpose of utilizing for promotion of interests of depositors and on that this fund was created by taking over inoperative deposit accounts which have not been claimed or operated for ten years or more or any deposit or any amount remaining unclaimed for more than 10 years lying with various banks in India.
He said as per the information provided in Indian Parliament in December 2013, Rs. 3,652 crore of unclaimed deposits is lying in Indian Banks. Out of this, 340 Crores deposited with the private bank and 75 Crores with the foreign banks. Among this amount 68 percent is of saving account and 13 percent is of fixed account. However, this does not extinguish the rights of the depositors/claimants to claim his/her deposits/unclaimed amount. Banks, on demand, shall repay the customer/depositor, along with interest if applicable and lodge a claim for refund from the fund for an equivalent amount paid. RBI has constituted a Committee to administer and manage the Fund in accordance with the Scheme. The fund needs to be utilized for promotion of depositors’ interests and for such other purposes, which may be necessary for promotion of depositors’ interest as may be specified by the Reserve Bank.
CUTS was assigned the task to implement the programmes in Rajasthan, the programme will encourage public to have on bank account, discourage public from keeping money in illegal non-bank entities, demystify KYC requirements, and provide information about customer rights as a depositor. 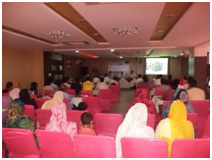 RP Sharma, Assistant General Manager, Office of Banking Ombudsman, Reserve Bank Of India Jaipursaid that it is quite natural that consumer may have grievances and complaints, if they are not satisfied with the banking services or products. But all bankers must take these complaints in good spirit and as an opportunity of reforming the banking services in general and banking system in particular rather than taking them as a nuisance activity. Banking Ombudsman also talked about the institution of Banking Lokpal, its functions and general principals and tips for depositors awareness so that the can their interests can be protected.
DS Medtiya Chief Manager, Baroda Rajasthan KshetriyaGrameen Bank talked about ‘Know Your Customer’ (KYC) norms and demystified it. He explained in detail about the KYC norms, role of banks in setting up the norms, importance of KYC and future role of KYC in safeguarding the depositor’s interest. Mr KN Verma, Counsellor, DISHA Trust- Financial Literacy Credit Counselling (FLCC) talked in detail about the customer rights, Charter of customer rights, overall protection of consumer concerns and more importantly, he talked about the grievance redressal processes on banks and right to compensation for consumers.

NK Jain, Lead District Manager, Bank of Baroda talked in detailed about steps taken by Bank of Baroda for consumer awareness programmes, steps taken for consumer protection and complaint redressal. He further added that Bank of Baroda has already designated internal banking ombudsman, who is taking care of grievances of consumers in a fixed timeframe.
Shiv Kumar Gupta, District Development Manager also shared his experiences and said that along with the responsibilities of the banking officials it is also necessary that all the consumers also follow their duties and approach to the internal mechanism of banks of complaint redressal rather approaching directly to the high level officials.
The workshop was attended by around 67 customers comprises of urban, semi urban and rural areas, which included representations from NGOs/SHGs and media as well.