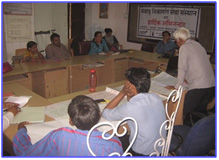 On 5th May 2017, one day orientation program for Disabled People Organisation (DPO) was organised on Sustainable development goal (SDGs) at Centre for Human Development.The objectives of the orientation is to make understanding on Sustainable development goals(SDGs) following Millennium Development Goals(MDGs), to review our work on SDGs and have a discussion on possibility for improvement according to development at grassroots level.Total 30 participants including 17 DPO members, project staffs and Noorjahan, Varidhisingh, Amareshpandey and Ketankothari from Sightsavers State team, were present in the program.

MrKetankothari shared the objectives of the program and shared millennium development goals in detail. He said that MDGs were decided by United Nation Organisation (UNO) which was signed by representatives from 193 nation of world for the overall development of the nations.The MDGs comprised 8 targets and 18 objectives to achieve plenary development. After completion of timeline of MDGs in 2015, a summit was organised by UNO and review the MDGs goals and prepared a new roadmap for worldwide development known as Sustainable development Goals (SDGs) for 15 years from 2015 to 2030. The main targets of SDGs are to end poverty and starvation completely from world within next 15 years, ensure the gender equality, elimination of inequality and injustice in all forms, conservation of earth and world ensuring the dignity life for all. There, 17 targets and 169 objectives are described in SDGs-2015 to 2030. 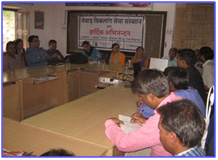 After in-depth discussion, three groups were formed and two SDGs goals were distributed into each group and directed to discussion on the SDGs goals given on by one in group and prepare a presentation on three circumference, first what efforts are being done by the government to achieve the goal, what should be done according to your group and any suggestion.