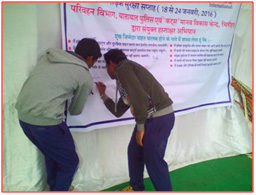 In the month of January of 2016, 27th Road Safety Week was celebrated by DPO members in the collaboration with Regional traffic department & traffic police Chittorgarh. The week was observed from 18th January to 24th January 2016. The theme of the event was “Road Safety-Time for Action”. Earlier, the DPO leaders were invited by regional traffic department in the planning meeting held at RTO office, chittorgarh& had the expectation for participation & make the event successful. Two DPO members (Mr. NirajLaddha& Mr. GangadharSolanki) participated the meeting from MewarViklangSewaSansthan. 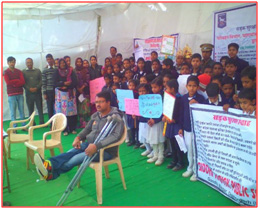 The DPO members had a plan to organize a signature campaign in the week at the main point of city (Collectrate Circle) where vehicles have more the pressure. In the campaign, the DPO members & CUTS volunteers will aware the drivers about traffic rules by posters & pamphlets provided by traffic department. The drivers or other population will be motivated to read the rules written on flex developed by CUTS & gave their sign over there declaring the follow of traffic rule so that they can be drive safe. The DPO members spread awareness about the bad effects of not to follow the traffic rules & requested to wear helmets whenever they drive the vehicle & use seatbelt whenever they drive four-wheelers. Almost 500-600 people read the traffic rules & signed over the flex during the program.